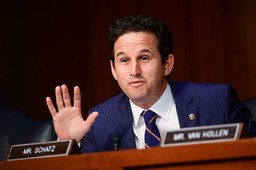 BOSTON/LONDON (Reuters) - Five Democratic U.S. senators on Thursday asked BlackRock Inc to justify why it rarely supported shareholder resolutions tied to climate change issues despite its increased focus on the environment this year. The proxy voting record of the top asset manager is "troubling and inconsistent," according to a letter sent to Reuters by the office of U.S.