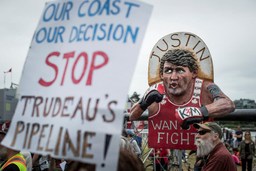 On Monday, Canada declared a Climate Emergency. On Tuesday, it approved another oil pipeline.

June 18 at 4:52 PM Canadian Prime Minister Justine Trudeau is an icon of progressive politics who has promised to " put a price on pollution." Last week, to much applause, he proposed a ban on single-use plastics. On Monday night, his government declared a national " climate emergency."